[UPDATE: Listen to DeLene Beeland interviewed by Frank Stasio of NPR’s The State of Things]

T. DeLene Beeland’s book The Secret World of Red Wolves takes readers on a journey into the field with red wolf biologists from the Fish and Wildlife Service to explore the modern management and conservation challenges faced in recovering wild red wolves. It also delves into the past and chronicles the early field efforts to locate and breed what were thought to be the last remaining red wolves in the far western reaches of their historical southeastern range, as well as early reintroduction efforts. The story covers the scientific controversy over what red wolves are, and looks to the future at what might happen to their coastal recovery area—their only recovery area—when sea level rise driven by climate change swamps the land around them. 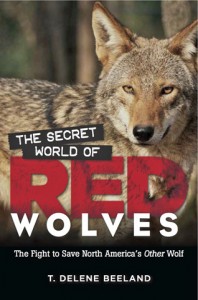 What others are saying about The Secret World of Red Wolves

The first complete telling of the comeback of the red wolf…The combination of first-person immediacy interwoven with red wolf history will delight animal lovers.

Beautifully written. Beeland covers the red wolf in an engaging and clear manner, and the action is page-turning. An important resource for scholars of wildlife and the environmental movement.